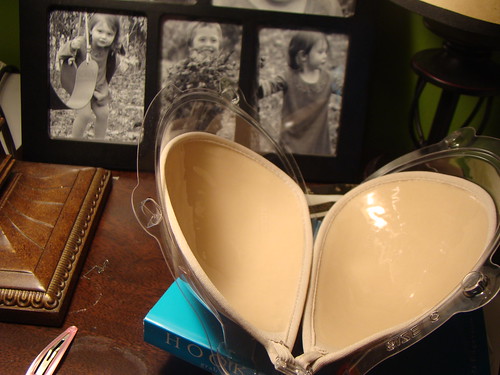 What are these things you wonder. Your gut tells you they’re something a bit grotesque though your eyes can’t say why that’s so, you can just feel it as you recoil from your screen.

And your instincts are right. These winged objects are actually the "SuperLite Adhesive Bra" I wore to a formal dinner the other night.

I bought three different items to experiment with that night because as any girl over the age of fifteen knows (okay, not the free-wheeling braless ones), finding a strapless bra that works is as elusive as that pot of gold at the end of some crappy magic rainbow.

So, I bought this gem of a bra, another bra that amounts to nothing more than paper with glue on the back and the old fashioned kind that never, ever stays up, but I couldn’t quite trust that this baby would do the trick. Let me tell you why.

This bad-boy is essentially a set of separated bra cups with glue on the back. The package claims that not only will these things stick to your skin, though somehow not rip it off upon removal, you can create varying degrees of cleavage to suit your needs. What’s not enticing about all that?

It seemed like it could be possible, but yet, how could this thing really work.

I imagined the adhesive leeching into my skin and blood stream sending the China manufactured glue toxiins right to my already lesioned brain. Or worse, images of one cup or the other snapping off and wiggling out from under my dress, causually sprawling itself on the ground at my feet. I visualized how I would step over the bra cup, snickering that I can’t fathom how a bra cup could simply materialize out of thin air.

I was prepared to try all three bras, knowing the process would put me in a full sweat by the time I actually left the house to go have dinner with a bunch of people who I barely know, am not sure how many I like and am damn sure everyone one of them is in fantastic shape and the last thing they’re worried about is how to stuff their perfect boobs into a adhesive bra.

So. There I was inspecting the apparatus, the half-bra and I have to say the damn thing worked. No slippage, no nipple issues, not even any trouble getting the things off. Other than it looked ridiculous as my boob stretched in all sorts of odd directions as the glue released.

Over all, I have to say as a feminine product goes, this is a can’t miss and I suggest it for anyone who has to do anything that requires straplessness.