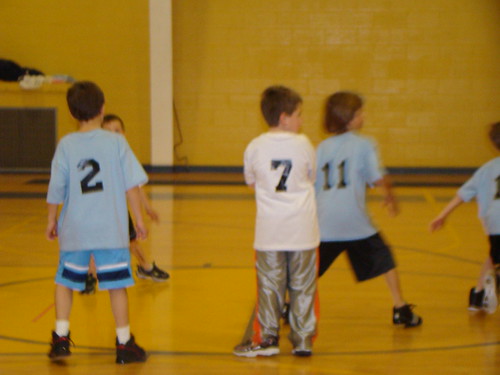 Oh man, youth basketball is not for the weak.
Well, it depends what team your kid is on–some teams are nothing but a disconnected web of fundamental weaknesses. But, hey, we’re talking first and second grade, here…everyone is weak at that point, right?

No, some teams run like they’ve been regularly tutored by Michael Jordan.
Either way it’s fun and funny, though some games have that creepy feeling of parental disgruntlement (mine as well as very vocal others) that can only surface in the gyms and in games of kids who are too young to care as much as their parents.

This league (his level) that Jake is in is for first and second graders. It’s run by our school district, let’s call it Riverview, but the district across the river, let’s call them Fox Chapel, sends a slew of kids over the bridge to play. That’s fine in theory. But, that’s also where it’s getting a little hairy. In practice, that is. Fox Chapel is perpetually at the top of the state in just about every academic and extra-curricular area known to man. It’s enormous and competition is the name of the game over there.

In theory, this disconnect in expectations shouldn’t be a big deal. It wouldn’t be if the Fox Chapel kids were actually interspersed throughout the league. But, when the "draft" went on, all the Fox Chapel teams picked each other and let me tell you, some of their teams create a scenario akin to your pick-up team accidently being slated to play Duke.

For adults that’s okay. For older kids, that’s fine–there’s no question learning to lose is as important as learning to win. It’s life, the biggest lessons live in losing and all the rest, but first graders who’ve never played the game before should have the chance to actually learn to play along the way.

Conversation:
Riverview Coach to Fox Chapel Coach, "Hey, we’ve stopped keeping score–how about each team just keeps it and you guys will still have won, but some of the kids are getting a little…"

Fox Chapel Coach "What are we playing for if not to keep score and win?"

Yeah, well, easily said when you’ve hand-picked one of three teams that could play with sixteen year olds.

First, in principle, I agree with Fox Chapel Coach as I know the Riverview Coach does, too. I’m competitive. I like to win and losing makes me work harder. I’ve learned that.

However, Fox Chapel coach is infuriating because his team is full of second graders who actually run plays, can make three-pointers and tackle anyone in their way. In my opinion, a little generosity is in order here.

In fourth grade? Tough luck for Riverview. But, when it’s a team’s fourth game of the season–of their lives–and they’re six and seven, well, I think an opportunity to actually learn the game is called for even if it means slowing the onslaught of jumpers from the more talented team.

The biggest joke in my opinion is that the guy acts as though his team is actually giving something up–like by stopping the game to show a kid on Riverview where he went wrong, thus losing a score–thus, not needing to show a score, that the Fox Chapel kids might confuse that with them not being better. The Fox Chapel parents were ticked off–how dare they not display the score??? were the exact words of the woman sitting beside me?

It’s awesome those kids are as good as they are, but if you’re playing in the Riverview league, then follow the Riverview philosophy–teach someone some life lessons–other than winning for cripes sake.