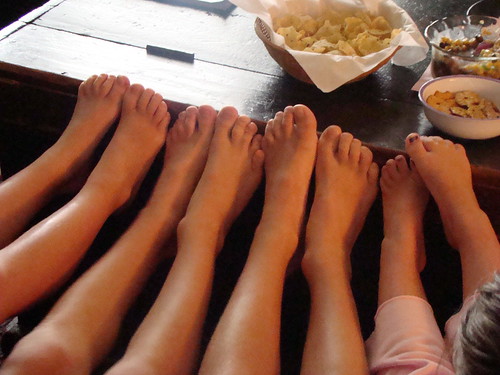 So, how do you know when the dead heat of summer is upon you? For Pittsburghers a sure sign is that no one is wearing shoes or socks. Well, don’t let me get too crazy with that statement–Nobody wears shoes or socks in houses, on porches (just their own, really) and sandals for both sexes are bared and put into action.

Not a big deal for you hot-stated people I know. But here where sunshine only rains down for a few months, feet are nearly always covered.

In college I went to visit my roommate in California and upon arriving, I was stunned to find that not only was everyone shoeless, but they went shoeless EVERYWHERE. To work, to play, and even into the grocery store. That was downright repulsive for me to see.

But slowly, over the month I was there, tooling around, sliding up and down the coast in an old black Nova, sans air-conditioning, wearing big hats, blaring Fine Young Canibals and Steve Miller Band, getting lost in questionable sections of fancy towns, sleeping on the beach, swimming with sharks, "bathing," in the ocean and restrooms, living on a gas card (way before there was a grocery store standing behind every set of pumps), I began to forgo my shoes nearly always.

I shudder to think that I even entered grocery stores shoeless. And we ate yogurt covered pretzels out of the bulk bin. We did buy them, too, but still, to think back. Where were my manners? Well, we were shoeless, I guess our manners went with the leather.

And once back in Pittsburgh, my shoeless exploits lasted exactly three days. It just didn’t feel right to get out of a car without even the teeniest flip-flops. Standing in a store that sold greasy perogies just didn’t have the same feel as standing, shoeless, in one that sold crab-legs and salmon.

And while, for a bit of time, I managed to keep hold of the feeling of freedom and inspiration I’d gained while in Cali, the shoes were the first to go, the first sign that a shoeless moment in time was just that–a moment.

But, if I try really hard, actually, when I don’t try, when I just sit there for a moment, remembering, that summer comes flying back to me, making me smile, making me remove my shoes. Just not for too long. Let’s not get nuts.